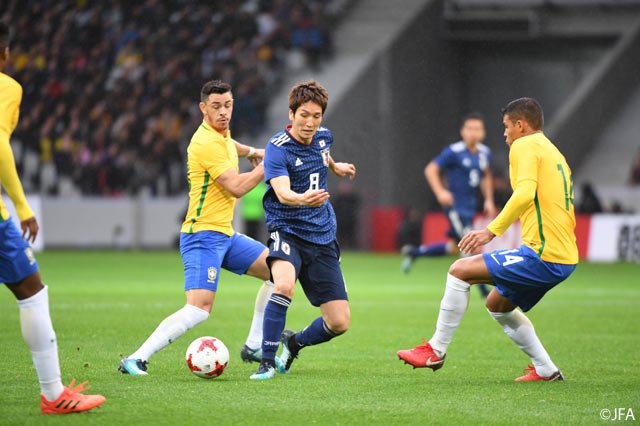 Japan fell 3-1 to Brazil on Friday in their first international friendly of the October break.

Just 10 minutes into the match, Brazil were handed an opportunity to take the lead when they were awarded a penalty kick following a video replay. Neymar stutter-stepped at the spot to put the South American titans up 1-0.

After a second penalty kick was awarded to Brazil in the 17th minute, Neymar repeated his stutter-step only for Japan goalkeeper Eiji Kawashima to dive right and successfully block the attempt. But a poor clearance on the ensuing corner kick allowed Marcelo to score from distance, making it 2-0.

Brazil weren’t satisfied with two goals in the first half, as Gabriel Jesus slotted home in the 36th minute to increase the deficit to 3-0 at the half.

Japan showed signs of improvement in the second half, increasing their possession but struggling to break down the Brazilian defense.

But in the 63rd minute, defender Tomoaki Makino headed in Yosuke Ideguchi’s corner kick to earn the Samurai Blues’ first goal of the match.

Substitute striker Kenyu Sugimoto appeared to score off a header late in the second half, but the final result remained at 1-3 after he was adjudged offside.