Kengo Nakamura joins in as Kawasaki Frontale nets five. Vissel Kobe vs Yokohama F.Marinos thriller ends up with a draw. 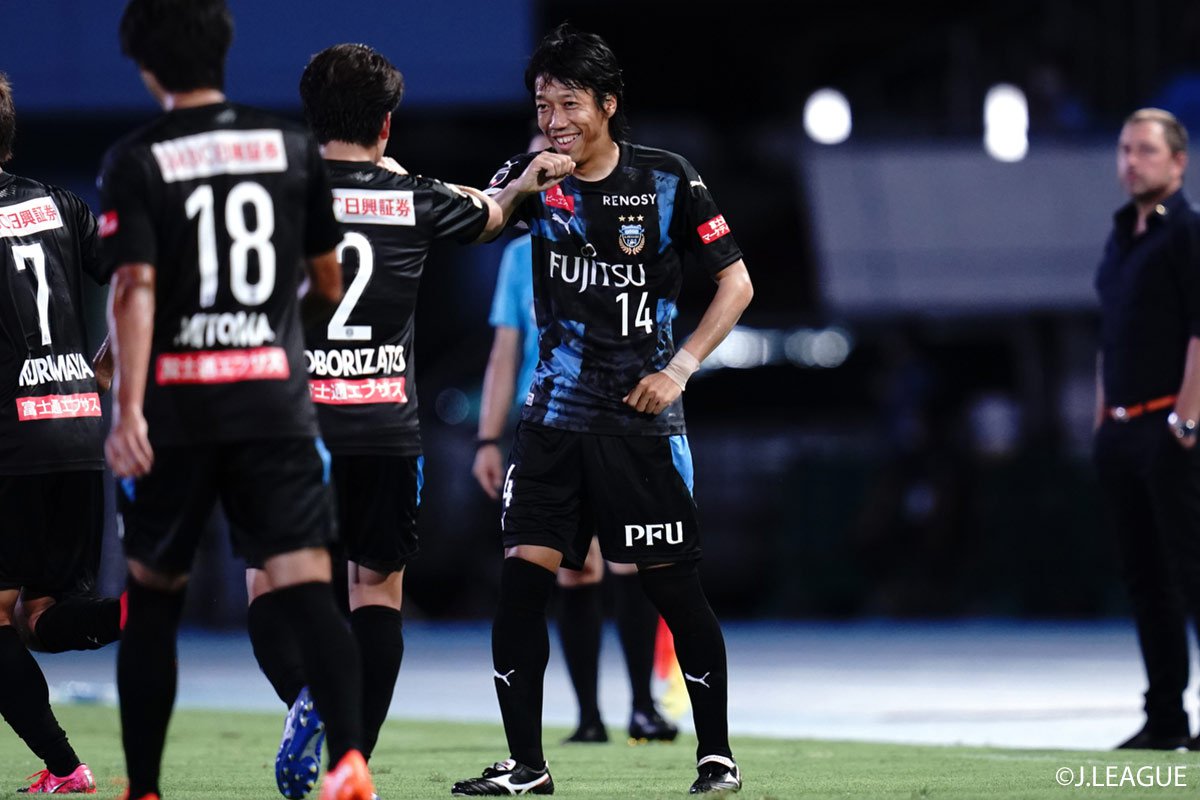 Frontale, who hosted Shimizu S-Pulse, took the lead in the 21st minute through a goal from Reo Hatate. Leandro Damião made it 2-0 in the beginning of the second half, and Reo Hatate scored again in the 74th Minute. In the end, the table leaders extended their tally to five, thanks to goals from veteran Kengo Nakamura, who has recovered from injury, and Kaoru Mitoma.

FC Tokyo traveled to Gamba Osaka. The away side’s striker, Diego Oliveira found the net early, in the 8th minute. Although Tokyo conceded an equalizer, the Brazilian re-established their lead in the 73rd. And eight minutes later, another Brazilian, Adailton, got another, sealing the capital team’s 3-1 final victory, that also meant a move up to third place. Urawa Reds, who hosted Oita Trinita, conceded the lead, but goals from Leonardo and Daiki Hashioka led them to a 2-1 victory.

Vissel Kobe and Yokohama F.Marinos were involved in a fierce duel. The home side were down 3-1, but thanks to their tenacity and two very late goals, they managed to tie the match - Kyogo Furuhashi with the final equalizer. Kashima Antlers traveled to Kashiwa Reysol. The visitors went one man up in the first half, when a red card was shown to Shunki Takahashi. Nonetheless, as Reysol’s Olunga netted a brace, Antlers were one goal down as the match approached its final minutes. But in the 89th minute, they were back in the game, thanks to a goal from Shoma Doi, who just 2 minutes later, added one more to claim the three points.

Sanfrecce Hiroshima took the lead with Leandro Pereira early into the game, but conceded in the 72th minute and shared points with Vegalta Sendai. The match between Consadole Sapporo and Nagoya Grampus ended up in a goalless draw 0-0.

Finally, Cerezo Osaka traveled to Yokohama FC. Hiroshi Kiyotake  was in great form, he found the net and led the Osakans throughout the match. In the 58th minute, Bruno Mendes extended the lead. Though they conceded one, Cerezo grabbed their second consecutive win. They now count 27 points and are still in second place. This game also marked the end of Yokohama FC’s their four-game winning streak.

The match between Shonan Bellmare and Sagan Tosu has been postponed due to COVID-19.