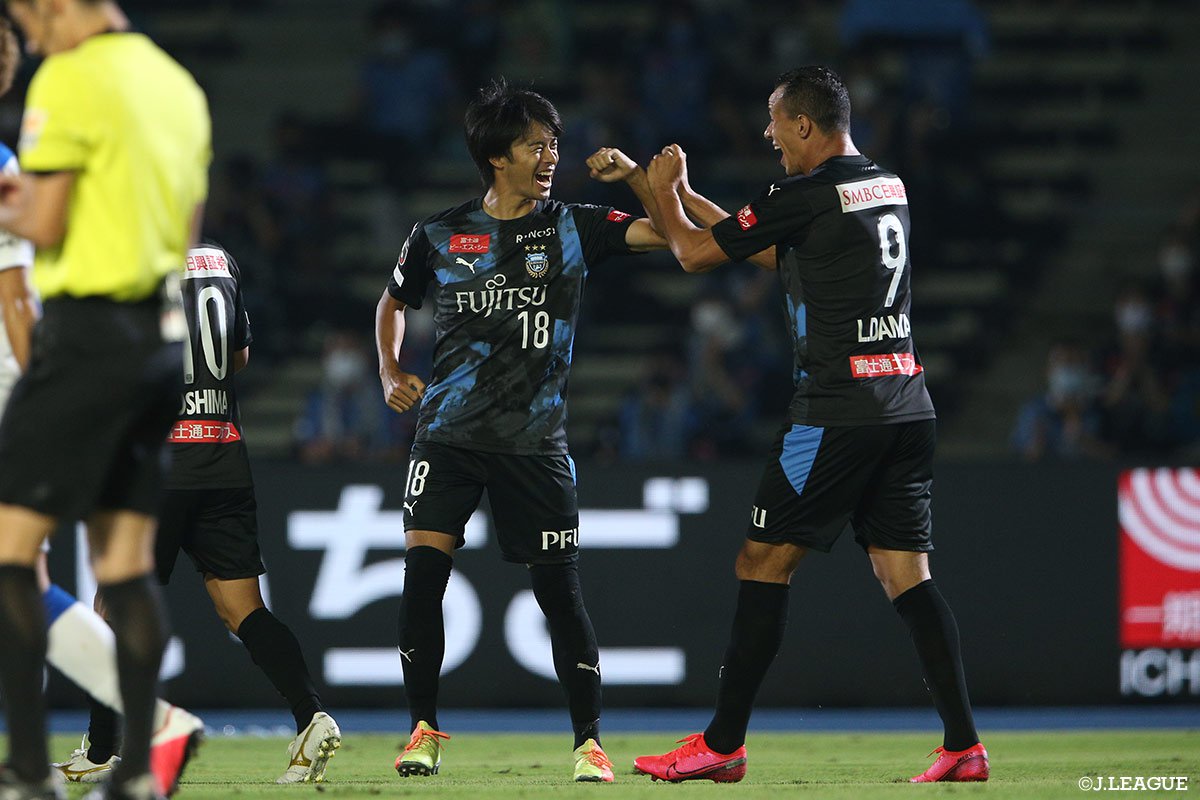 A total of six match-days of Meiji Yasuda J1 League were played in August. Let’s look back at how teams did during this busy month in the midst of the summer heat.

Kawasaki Frontale’s dominance continued. Although their winning streak that had started on Match-day 2 came to an end when they suffered a defeat at the hands of Nagoya Grampus on Match-day 12, they kept earning points in August, adding another five wins, a drew and a loss (including the already played Match-day 24 against Vissel Kobe). Their amazing firepower was confirmed by them scoring five or more goals in three matches during this period. In addition to Leandro Damião and Yu Kobayashi, the rookie duo of Kaoru Mitoma and Reo Hatate is also producing a considerable number of goals. With Kengo Nakamura also scoring to celebrate his comeback from injury, Kawasaki’s incredible run earned them an eight-point lead at the top of the table, and it won’t be easy for any of their rivals to catch them.

Second-place Cerezo Osaka are another team that showed continuity, registering four wins, a drew and a loss in August. Their big defeat against Kawasaki Frontale on Match-day 11 was hard to swallow, but they displayed their solid defense in all other matches. Their attacking ability is also improving, thanks to the good form of Hiroshi Kiyotake and Bruno Mendes, which is good news for Cerezo ahead of September, a crucial month if they want to try to chase up Kawasaki.

Kashima Antlers and Yokohama F.Marinos showed signs of comeback in August, as both won four matches. Kashima are starting to thrive as the team adapts to Zago’s new style of football and Everaldo finally shows his quality. While Atsuto Uchida’s retirement could have an impact on the team, players like Shoma Doi and rookie Itsuki Someno have become important to keep up the good form for the rest of the season.

Defending champions Yokohama F.Marinos’ attacking power is on fire again, with 14 goals scored in the last four matches. New signing Júnior Santos had an immediate impact, and last year’s top scorer duo Marcos Junior and Teruhito Nakagawa are improving their form. Although the number of goals conceded is a concern, F.Marinos performance in recent matches suggest there are chances to see them joining the title race.

Yokohama FC are another team that had a good August. They had a three-match winning streak, beginning with the victory against Shonan Bellmare on Match-day 10. The return to a back-four system worked well and attackers such as Yusuke Matsuo are thriving. If they maintained their form, they could become the dark horse of the season.

Meanwhile, Gamba Osaka, Vissel Kobe and Sanfrecce Hiroshima have struggled to earn points. Shimizu S-Pulse, who once looked like they were past the worst time, are back in a tough situation again after three consecutive defeats.

The two teams that had the worst August are Hokkaido Consadole Sapporo and Shonan Bellmare, both unable to register a single win. Sapporo had two draws and four defeats, while Shonan lost all of their five matches.

Sapporo’s defense needs a serious makeover after conceding three goals or more in four matches, and the departure of Musashi Suzuki might have a big impact on the rest of the season. Shonan, in addition to defensive problems are also experiencing issues in their attacking department, failing to score in four out of five matches. If they cannot find solutions soon, the struggle could last for the rest of the season.

The Four matches involving Sagan Tosu, those between Match-days 10 and 13, have been postponed after several players and staff of the club tested positive for COVID-19.

As for individual performances, Kashiwa’s Olunga is drawing a lot of attention. The Kenyan striker scored in seven consecutive games from Match-day 5, netting six goals in six matches in August. Nagoya’s Naoki Maeda impressed against Urawa Reds on Match-day 9 by scoring four goals in the same game, and Urawa’s Leonardo and FC Tokyo’s Leandro are constantly increasing their goal tallies. This year’s race to become the top scorer will surely be tough!