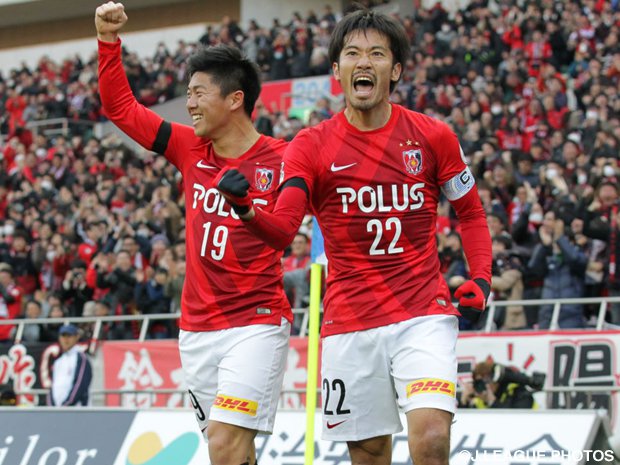 Urawa Reds are threatening to build a significant lead over their J.League title rivals after they ground out a 1-0 win over Montedio Yamagata on Saturday, while a full-blown crisis is erupting at Kashima Antlers.

Though victory was far less comprehensive for last season’s runners’ up on this occasion, Urawa’s perfect record so far means they have already built up a healthy five-point lead over Gamba Osaka.

Kenta Hasegawa’s men travelled to title outsiders Sagan Tosu later on in hopes of maintaining the pace, but Baek Sung Dong’s goal right after half time wrecked the champions’ hopes.

A fairly low-key matchday 2 was still kept dramatic as Kashima Antlers’ terrible start to the season continued with a spineless 1-2 home loss to Shonan Bellmare.

After three straight losses in all competitions, the fallen giants finally appeared to be on the road to redemption in front of their supporters when Mu Kanazaki fired home in the 13th minute.

But promoted Bellmare kept up the pressure on their hosts and were duly rewarded when Wataru Endo - who already scored against Urawa last week - turned home a 54th minute equaliser, setting the stage perfectly for Alison’s stoppage-time sucker punch.

Endo is joined on two goals by last year’s most prolific marksman Yoshito Okubo, who scored again as Kawasaki Frontale came back from behind twice to draw 2-2 against Vissel Kobe at Todoroki Stadium.

Earlier, Yoshinori Muto had not managed to hit the heights of his previous week’s brace as Japan coach Vahid Halilhodzic watched FC Tokyo play out a goalless stalemate with Yokohama F.Marinos.

Ventforet Kofu managed to pick up their first points of the season by beating Nagoya Grampus 1-0, after relegation rivals Shimizu S-Pulse failed to find the breakthrough Albirex Niigata even though new signings Peter Utaka and Mitchell Duke came off the bench in the second period.

Finally, Sanfrecce Hiroshima look like they will breeze to mid-table safety again this term, after Koji Morisaki’s finish saw them dispose of Matsumo Yamaga 2-1 and jump up to second in the table.