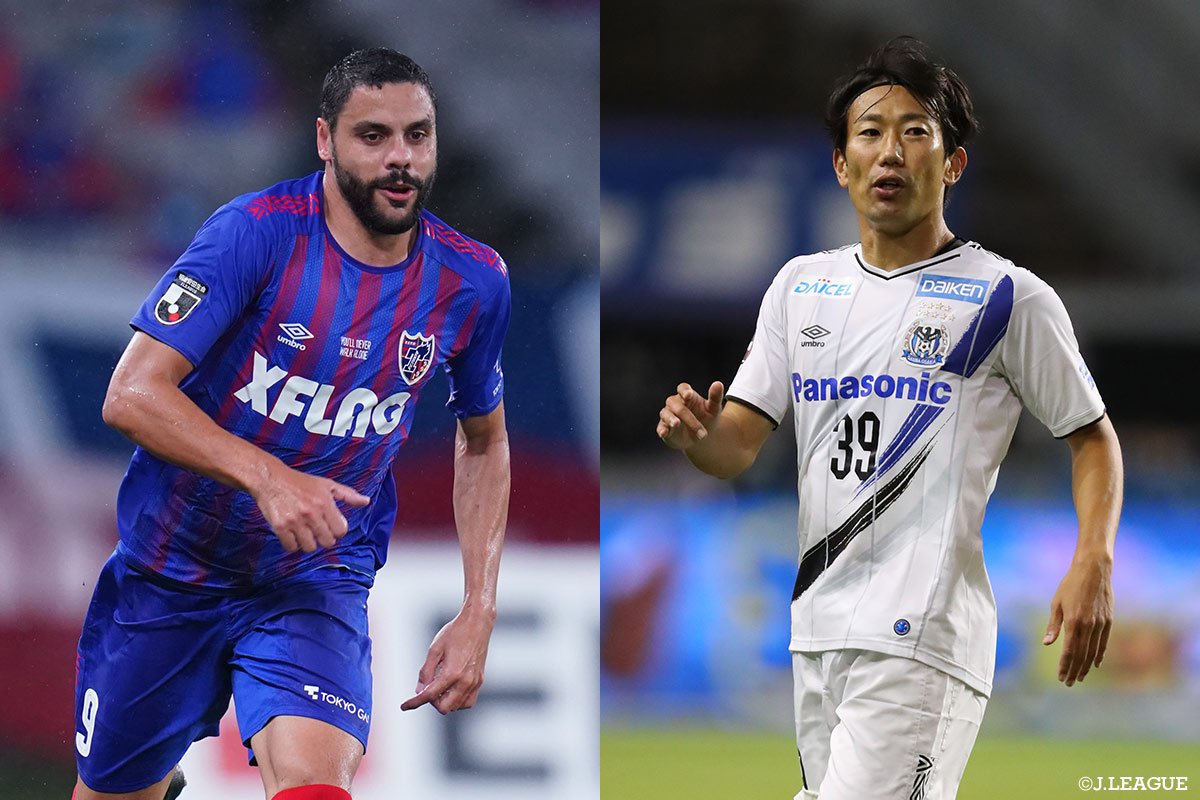 Meiji Yasuda J1 League Match-day 21 will take place on the 10th of October.

Table leader Kawasaki Frontale house Vegalta Sendai at home after securing all three points at the Nagai Sports Ground last week – their eighth straight victory. Despite the mid-week Levain Cup setback, ‘focus’ is all Kawasaki need to strive for the league title. Meanwhile, visitors, Vegalta Sendai have been winless for the past ten games as last week’s two-goal lead came to naught when they conceded two sloppy goals to earn merely a point at the Sapporo Dome. Allowing three goals behind their net last week, Vegalta’s management of their fully exposed back-four against the fiery artilleries of Kawasaki is the top concern.

Fourth-placed Gamba Osaka’s away trip to the capital city is the fixture under the limelight. Spirited FC Tokyo come off from three straight away wins that include Levain Cup semi-final fixture against Kawasaki; they have not conceded a single goal during this period. Tokyoite’s hard-rock defence will be tested this week as the on-form Osakans are prepared to extend their league winning streaks to six, having fired nine goals in the past five fixtures. Notably, 34-year-old forward, Kazuma Watanabe has been responsible for close to half (4 goals) of the bundle and will remain key to narrowing the gap on the ladder with the other Osaka outfit and FC Tokyo.

A home defeat against the league leader meant reallocation on the ladder was unavoidable for Cerezo Osaka; repetition of last week’s lackluster defeat may see them further down the table in weeks to come. Cerezo visit the Paloma Mizuho Stadium this week and defensive amendments are a top priority for the anxious Osakans that have conceded nine in the past four outings. On the other hand, Nagoya Grampus enter the fixture lighthearted, pipping out Urawa Red Diamonds; rekindling the flame on the title race. Having won only on alternate game weeks since September, can Nagoya further their momentum?

Another compelling fixture is the drowning Yokohama F. Marinos versus rising Oita Trinita. The host suffered two home defeats in a row; a league defeat against Vissel Kobe on a five-goal haul and Leavin Cup semi-final misery by Kashiwa Reysol. Honing their arsenals would be the foremost priority as plenty of chances were missed only to be rued. And the rising Oita Trinita are prepared to leverage F. Marinos’ flaws and register their third consecutive victory. Tatsuya Tanaka, with seven goals to his name this season, the diminutive midfielder will be vital for another Oita success away from home.

Buoyed by last week’s annihilating three-goal rout against F. Marinos and the mid-week Leavin cup outing, Kashiwa Reysol welcome Vissel Kobe at home. Having gained the impetus, the Nelsinho Baptista’s boys aim to replicate them at the Sankyo Frontier Kashiwa Stadium. However, the contestant is no less. The past four fixtures have seen them collect all 12 points after Thorsten Fink’s departure and the Spaniard, Andrés Iniesta, will again be pivotal for Kobe’s away victory.

A rank below Kashiwa on the ladder is the 2018 AFC Champions League winner Kashima Antlers. Unlike their status, Kashima have failed to bag any point in the past two outings and are rearing for the weekend’s fixture against Yokohama FC. The silent Kashima ordnance with no goals in the last two games may need a wake-up call. The travelers too were defeated in the previous fixture (0-3 Kashiwa Reysol). Defensive rectification after conceding three last week would be the key focus for Yokohama.

Meanwhile, at the west bank of Japan, Sagan Tosu invite Urawa Red Diamonds at home. Tosu are winless for the past three match-weeks and lost the past two games conceding three and two each. Faced with congested league fixtures, vanquishing the plight are Tosu’s main objective this season. Visitors, Urawa are no better. Losing all three of their recent fixtures at home, Reds have not scored a single goal during this period. Manager, Tsuyoshi Otsuki will be counting on forwards Shinzo Koroki and Leonardo to break the silence.

At the IAI Stadium Nihondaira, Shimizu S-Pulse host eleventh placed Sanfrecce Hiroshima. Shimizu, like many other lower-ranked teams, have failed to collect any points in the past three fixtures. Defensive amendments are of top concern for S-Pulse, having conceded the most number of goals in the league this season. The visitors, Hiroshima, aim to extend their last week’s victory to a continuity. The 25-yard assassinator, Toshihiro Aoyama is the key player-to-watch.

Hokkaido Consadole Sapporo whet themselves for another Sapporo cinematic fixture at home. The 15th placed Sapporo will house bottom-of-the-table, Shonan Bellmare. Sapporo, despite being winless for the past four outings, resilience was what packed the Sapporo Dome last week – removing a two-goal deficit to equalize the match. The revitalized cannonries were of relief for the Hokkaido side and the Brazilian forward Anderson Lopes holds the key to unlocking the yearned victory at home. Meanwhile, bottom-placed Shonan Bellmare are not only point-less but goalless for the last four fixtures. It is a mystery whether their resurrection would find its way this weekend.