Junker headlines awards as Meiji Yasuda J.League names the best of May 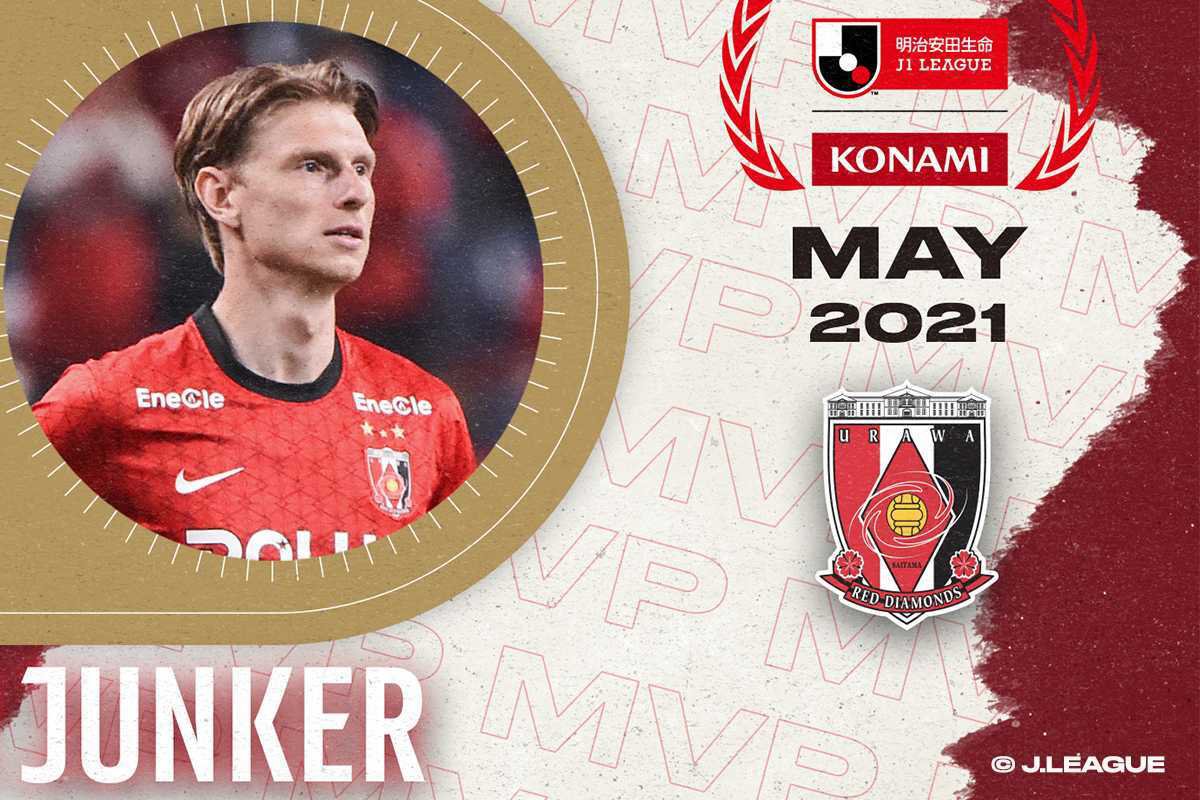 The Konami MVP awards for the month of May are in, and in the Meiji Yasuda J1 League, top honors go to Kasper Junker. The Dane joined Urawa Reds in early May and immediately poured in goals, scoring five goals in as many matches for the club. His outstanding goal scoring also helped move Urawa up the table, as the Reds went undefeated with him on the pitch.

J1 Manager of the Month honors were handed out to Naoki Soma, who steered Kashima Antlers to a terrific May. The club scored two goals a game for the month and earned 15 points, more than they had picked up in the entire season before that, and they vaulted up to eighth in the table.

Goal of the Month honors in J1 went to none other than Leandro Damião. The Kawasaki Frontale striker won the award for February/March, but his strike in Matchweek 16 to win the award for May was even better. The champions found themselves trailing in the 82nd minute and facing their first loss of the season, but that’s when Damião took a ball with his back to goal from 10 yards out, popped it up in the air and hit a spectacular bicycle kick. It was an awe inspiring goal, and a crucial one at that as it kept Frontale undefeated on the season.

In J2, JEF United Chiba’s Tomoya Miki was named Konami Monthly MVP. The 23-year-old finished the month strong, scoring in three straight matches and adding an assist as his side climbed up the table following a shaky start to the campaign. Now, JEF United Chiba are riding a six-game unbeaten streak and into the top half of the league with a red-hot Miki leading the way.

Akira Ito was named Manager of the Month in J2 after leading Ventforet Kofu to an undefeated May. Ventforet Kofu gave up two goals in their first match of the month, a draw, and then did not give up another goal for the rest of May as Ito constructed an impenetrable defense. The excellent run for Ventforet Kofu now has them fifth in the league and in the hunt for a promotion place.

The J2 Goal of the Month went to Tochigi SC’s Juninho, whose magnificent goal in Matchweek 11 made him a deserving winner. The Júbilo Iwata goalkeeper came well out of his box to clear a ball, and having cleared it near midfield, that should have been enough. But the ball found Juninho, who despite being close to the midway line and near the sideline, fired a shot that cleared all the defenders and a recovering goalkeeper for a goal to remember.

In J3, it was a big month for Fukushima United FC, who won four of four in May. Their manager Yu Tokisaki was duly rewarded with J3 Manager of the Month honors, while Nigerian striker Origbaajo Ismaila was awarded Player of the Month. Goal of the Month honors in the third tier were awarded to league leaders Kataller Toyama and Sho Hanai, who finished spectacularly in Matchweek 8 against Azul Claro Numazu.