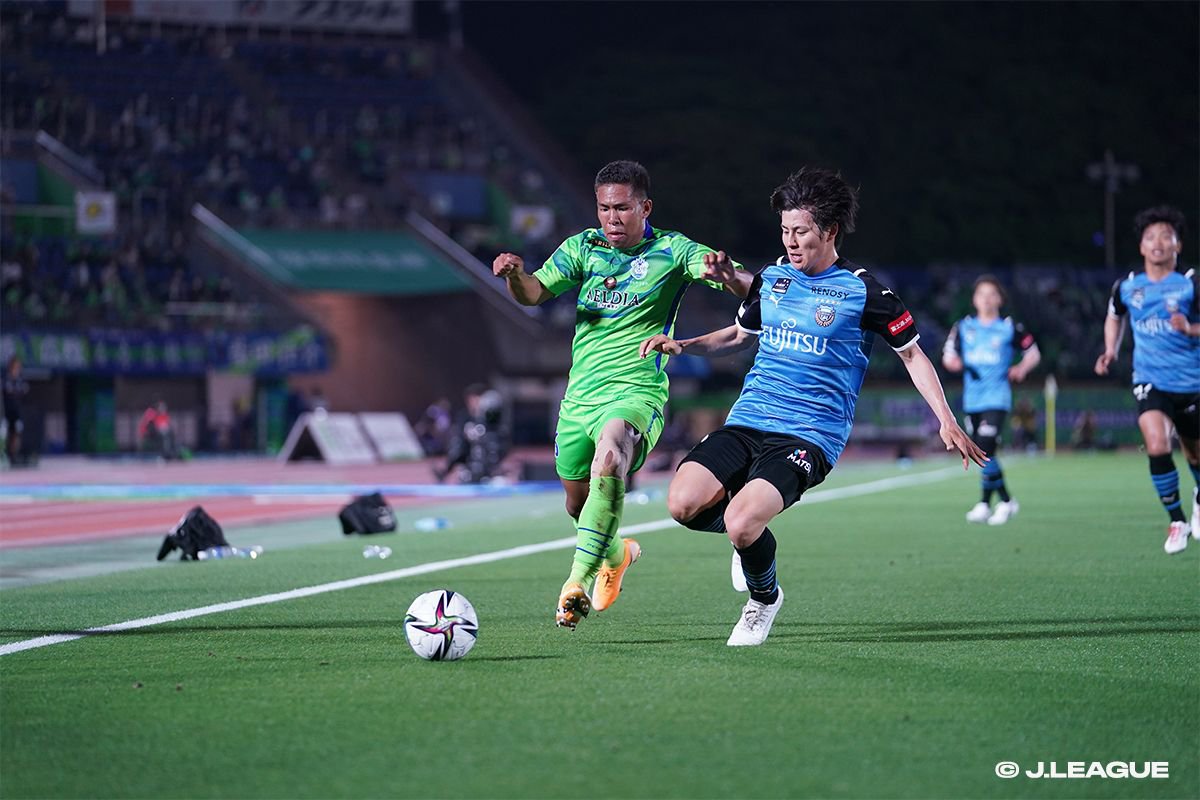 Shonan Bellmare were on their way to a huge victory, and Kawasaki Frontale on the verge of suffering their first defeat of the season. A goal by Naoki Yamada had put the home side in front and had the defending champions on the brink, but then Leandro Damião came to Frontale’s rescue. The Brazilian collected a pass 12 yards out, popped it up to himself then hit a spectacular bicycle kick to find the back of the net. The Shonan fans couldn’t even mount jeers, they were so in awe of the magnificent goal. While the equalizing goal did steal the spotlight, Shonan ultimately held on to earn a terrific point for their efforts.

As expected, Nagoya controlled this match. They had most of the ball and most of the shots. But the league’s second place team couldn’t find a goal, and that proved costly because Martinus did. A good Vegalta press forced Nagoya into turning the ball over in their own half and Vegalta quickly got the ball to Martinus, who dribbled past one defender, invited another then hit a low shot through traffic that found the corner of the goal to hand his side a crucial three points in their fight to avoid relegation.

The vaunted Sagan defense was up to the task yet again, putting the clamps on a dangerous Sapporo attack led by the league’s top scorer, Anderson Lopes. Unfortunately for third place Sagan, their attack let them down, mustering just seven shots and none on goal as Sapporo put on a defensive masterpiece. In the end, neither team could break through, but a point was enough to keep Sagan in the coveted third place spot.

Marinos put together an incredibly dominant showing in Oita, but for 82 minutes it didn’t mean much because they hadn’t scored. That’s when Daizen Maeda, the man who has starred for this terrific Marinos side all season, came to the rescue. He got free in the six-yard box, got on the end of a cross and headed into the back of the net for what would prove to be the only goal of the game. Marinos finished with 76% of possession and 21 shots to Trinita’s 2, but it would have meant nothing if not for Maeda, who was Marinos’ hero once again.

Two matches after getting their first win of the season, Yokohama FC got another result. Kléber got Yokohama in front after 26 minutes when he met a cross in front of goal and coolly nodded it into the side netting. Bruno Mendes got Fukuoka level and Juanma had a chance to deliver the visitors a win, but he pulled a penalty wide of the net. In the end, Yokohama walked away with a point, and while they are still at the bottom of the table, they’re getting better and may have a run out of the drop zone in them still.

Kashima’s unbeaten streak came to an end over the weekend when Sagan got the better of them, but they got back to their winning ways thanks to Ryotaro Araki. Kashima capitalized on a bad Cerezo giveaway, countering quickly against a Cerezo defense on their heels and feeding Araki on the left wing. Araki gathered the ball, cut in and curled a shot right into the side netting for his sixth goal of the campaign and, more importantly, earning Kashima three points to take sixth in the table.

Urawa entered the match with five wins in their last six, and they nearly made it six of seven, but a Sanfrecce denied them at the death in a thrilling contest at Edion Stadium Hiroshima. Kasper Junker continued his blistering hot form with yet another goal to open the scoring before Rahyner equalized for Sanfrecce. When Shinzo Koroki buried a penalty in the 84th minute, Urawa looked set to take home another win, but Hayao Kawabe hit a belter from 20 yards in the dying minutes to steal a point for Sanfrecce and cool down red hot Urawa.

Vissel kept pace in the fight for third and fourth place with their first win in four contests. Yuta Goke got them going 30 seconds into the second half when he banged the ball in from five yards out, then an own goal doubled the Vissel lead. Keiya Shiihashi cut the Vissel lead in half, but Reysol didn’t generate many opportunities after that and never really threatened to equalize as Vissel walked away with a comfortable away win.

S-Pulse welcomed F.C.Tokyo to IAI Stadium Nihondaira without a win in their last nine and in need of three points. Three goals later, they had just that. Thiago Santana got S-Pulse going when he bundled a rebound into the back of the net 14 minutes in, then in first half stoppage time Valdo skied high to meet a corner kick and headed home to double the S-Pulse lead. By the time Eiichi Katayama came flying in and volley home a corner kick of his own in the 49th minute to make it 3-0, S-Pulse had the match in hand and those elusive three points.

Gamba’s seven-match winless streak is no more, and they ended it in style. It started with some beautiful passing and movement, which finished with Patric getting free in front of goal and meeting a low cross with a perfect shot to give Gamba an early lead. A Ken Iwao penalty got Vortis level, but Takashi Usami’s scissor kick of a high ball put Gamba in front for good. Two great goals, three points and the end of a winless streak as they begin their climb out of the bottom four.