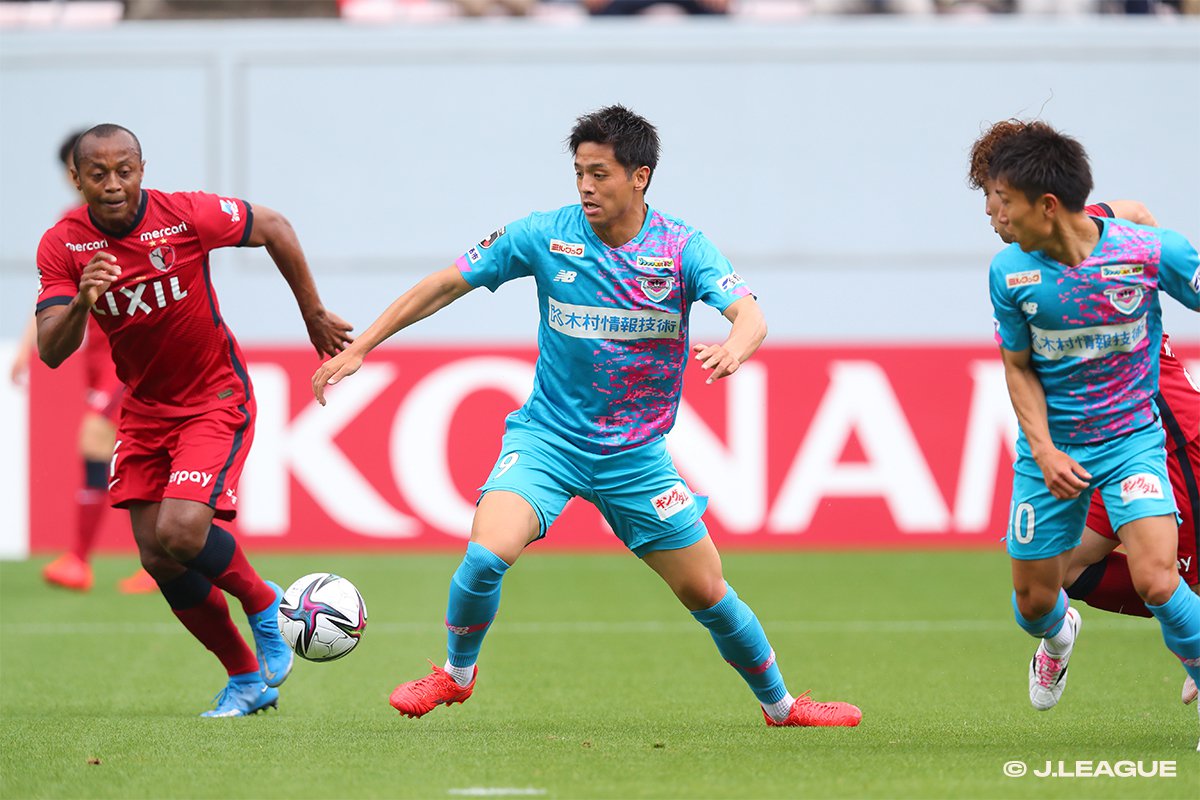 The matchup of the league’s first place team hosting the league’s last place team went largely as expected. Frontale were dominant from the start and had themselves a lead within 20 minutes thanks to an Akihiro Ienaga penalty. Goals by Ao Tanaka and Kaoru Mitoma followed so even by the time Kléber got Yokohama on the board, Frontale were unbothered and en route to another win.

Nagoya are used to playing tight matches with a good defense limiting chances and opportunistic attacking to take advantage of one or two mistakes by their opponent. The problem for them is Vortis were set up to do the same thing, and they did it well. As a result, the two teams only asked the goalkeepers to make three saves combined as they split the points.

Kashima’s 12-match unbeaten streak is over thanks to an ever resolute Sagan. The visitors started brightly and took an early lead through Yuta Matsumura, who benefited from a deflection to give Kashima a 14th minute goal. But Sagan always seemed a little more in control and more likely to score. Plus, getting two behind their league-best defense always feels nearly impossible. It took until the second half before Sagan finally got even with Keita Yamashita jumping on a spilled rebound and blasting it home five minutes after halftime. Then, 12 minutes from time, Yuta Higuchi hit a shot that somehow made it through a slew of bodies in front and Sagan had themselves not just a win, but a statement against a red-hot team and a more secure grip on third place.

A trip away to Marinos is never an easy task, but Reysol handled it well and earned a crucial point in their fight to avoid the bottom four. Both defenses held firm for much of the match, with a spectacular header from Ado Onaiwu that clattered the bar proving to be the closest either team came until the 82nd minute. That’s when Ippei Shinozuka met a cross at the far post and slid to redirect it into the back of the net. Unfortunately for Reysol, their lead only lasted for four minutes because Ken Matsubara hit a belter from 20 yards to ensure Marinos would at least walk away with a point.

This match was decided within a minute, as Tokyo took possession after kickoff and Diego Oliveira's shot found the net after only 46 seconds. From there, it was all about preserving the lead, which F.C.Tokyo did ably to make that stunning opening minute goal stand up.

Urawa entered with three wins in their last four, and they made it four of five with a clinical performance over a good Vissel side. Tatsuya Tanaka put the Reds in front with a header that kissed the post before getting over the goal line. Then, Kasper Junker scored his fourth goal in three league matches since joining the Reds, as the Dane continued to blow the league away in a spectacular start to his time in Urawa.

It took 50 minutes before Consadole’s constant pressure paid off, and when it did, it was through Anderson Lopes, of course. The Brazilian got to a ball 10 yards out and blasted it into the top of the net for his league-leading 12th goal of the campaign. It was a deserved lead for the home side, who played wonderfully, and it was deserved four minutes later when Takuro Kaneko hit a beautiful shot from 20 yards to double Consadole’s lead. A late red card to Kim Min-tae put a slight damper on the showing for Sapporo, but they still had themselves a well-earned victory.

Vegalta and Trinita both got off to quick starts, with Takuma Nishimura putting Vegalta in front after five minutes and Shun Nagasawa equalizing seven minutes later, but after that the match slowed. It became a cagey affair in search of a hero, and Chihiro Kato stepped up to be just that. The Vegalta man came flying across to meet a cross and hit a terrific header in the 74th minute that just got past the goalkeeper for Vegalta’s second win of the season.

A Shonan lead is usually secure given their excellent defense. So, when Shintaro Nago gave Bellmare a 32nd minute lead, things looked good for the visitors and when Kosei Tani parried away an Avispa penalty kick in first half stoppage time, Shonan looked on their way. But, the Fukuoka side stormed back, with Bruno Mendes expertly heading home a free kick in the 65th minute to equalize. Then, Douglas Grolli won a race to a loose ball in the box from a corner kick and knocked it into the back of the net, earning Fukuoka a comeback win and tightening their grip on fifth place.

A scoreless first half gave way to an action packed second at Yanmar Stadium Nagai. A minute after the break, Hiroaki Okuno scored on a mad scramble in front of goal from a corner and Cerezo had themselves a lead. It would only last three minutes, though, because a corner on the other side of the field saw Júnior Santos knock the ball home for an equalizer. Then, Júnior Santos got involved again, this time driving right through the Cerezo defense before playing Yuya Asano in alone on goal and Asano easily rounded the keeper before finishing into the open net for the winner.