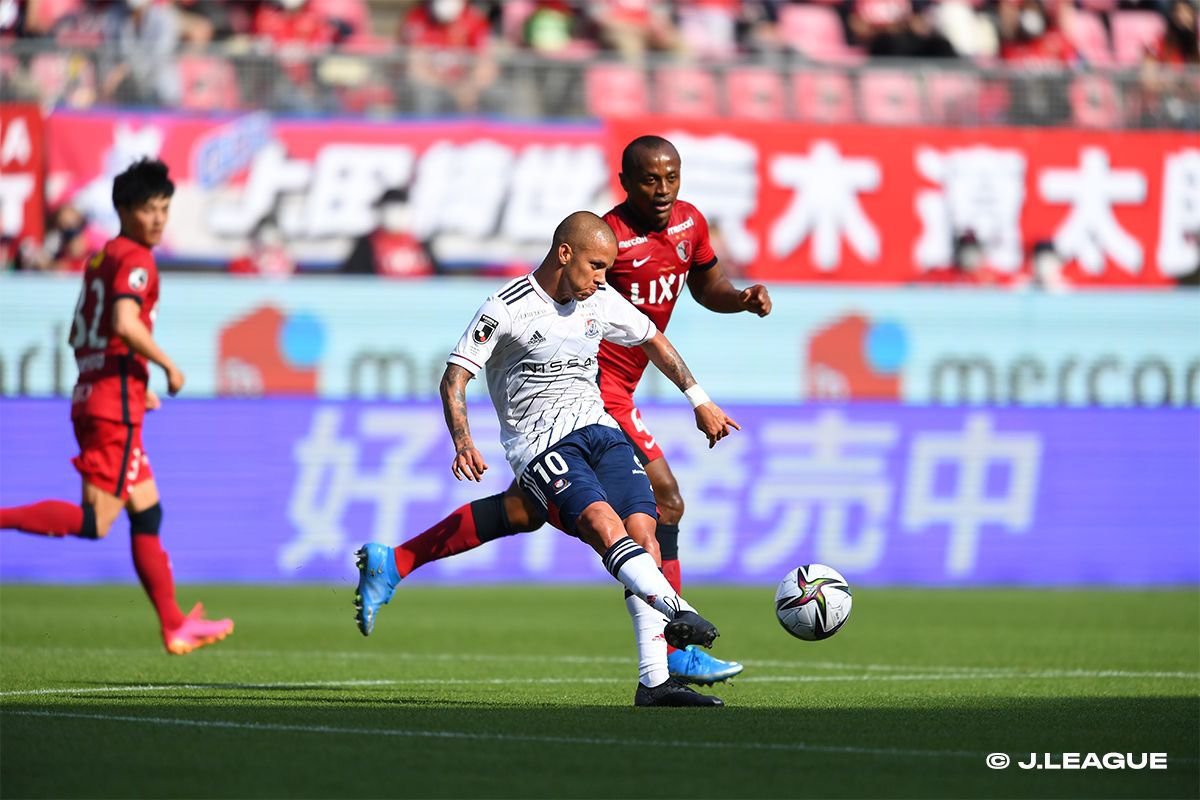 Consadole went to Kawasaki and played a good match, giving Frontale a real fight, but in the end the champions were just a little too good. A scoreless first half had Consa thinking they were going to get away with a result, but Kaoru Mitoma broke the deadlock in the 49th minute off a gorgeous assist from Reo Hatate. Yu Kobayashi then added a goal of his own in stoppage time and Frontale had themselves a MEIJI YASUDA J1 LEAGUE record 22-match unbeaten streak.

Nagoya are back to playing their best and they showed it in Shizuoka. Yoichiro Kakitani put them in front with a 24th minute opener, but Mateus was the real star with a second half brace. His first goal came on a fizzed-in, curling cross that barely missed both his runners and the goalkeeper to find the corner of the net. Then, he hit another brilliant curler, this time shooting, to score his second and wrap up a convincing win for Nagoya.

Sagan’s fight for a spot in next season’s AFC Champions League continued over the weekend and, while they will be disappointed not to have won, their draw was enough to move them into the crucial third place. Keita Yamashita put Sagan in front early on and it looked like that would be enough for the win as they defended typically well. But Trinita got even in the 82nd minute when Shun Nagasawa met a cross with a strong header that found the back of the net and split the points.

A matchup between the two J.LEAGUE teams with the most titles went the way of Kashima in a wild one. Shoma Doi was the hero, netting a hat trick to answer an early Ado Onaiwu goal. Doi scored his first just before halftime, then his second in the first minute after the break, before a penalty in the 53rd minute for his third. Ryotaro Araki then got on the scoresheet to make it 4-1 to Kashima. Marinos battled back through Onaiwu, who scored again to move joint-top of the league scoring charts, but Ayase Ueda added an insurance goal to put the match well out of reach—even with Jun Amano’s late goal for Marinos. With the big win, Kashima have now gone 11 matches in all competitions without a loss, while Marinos’ 16-game unbeaten streak is over.

Only one team in the league has won their last five and that’s the top-flight new boys Avispa Fukuoka, who secured a late win in Sendai. Both Fukuoka and Vegalta traded chances throughout the game, with Vegalta nearly scoring on a couple occasions only to be denied by excellent Masaaki Murakami saves. In the first minute of stoppage time, Daiki Watari found the back of the net and while it was ruled out, VAR said it was a good goal, and Fukuoka had themselves a last-minute winner.

It looked like Cerezo was going to walk away winners thanks to a Tatsuhiro Sakamoto goal, but Vissel Kobe’s Thomas Vermaelen had other thoughts. The hosts were flying forward in stoppage time trying to find an equalizer, and after a series of blocked shots left a bouncing ball at 15 yards, Vermaelen came flying in and hit an absolute belter that rattled the back of the net and delivered a 96th-minute draw for Vissel.

A dominant first half was plenty for Urawa, who are now just five points off of third place. Kasper Junker was again the central figure in Urawa’s first half excellence, constantly getting into good positions and being rewarded with a pair of goals. Tatsuya Tanaka got a goal of his own too, running in from the back side to meet a cross, and that was all Urawa needed to wrap up an easy three points.

Yokohama FC finally have their first win of the season! A rough start to the year had Yokohama searching for a league victory, but that’s no longer missing after a comprehensive performance against Shonan delivered all three points. Goals by Yota Maejima and Takuya Matsuura scored on each side of halftime and Akinori Ichikawa played superbly in goal to keep Shonan at bay in a big day for Yokohama.

It took all of 18 minutes for F.C.Tokyo to grab complete control of this one. Diego Oliveira scored the opener thanks to a terrific run and assist by Adaílton, then Adaílton did it on his own with a pair of goals and before the time clock had shown 19, Tokyo had themselves a 3-0 lead. Hirotaka Mita then added a late goal to wrap up what was a terrific day for F.C.Tokyo in picking up an away win.

Sanfrecce played well from the jump and generated chance after chance, but their finishing was not at its best, so no goals came. Still, it only seemed like a matter of time, with Vortis on the back foot, but a single counterattack changed the match. Vortis won the ball and flew forward, finding acres of space and eventually Takeru Kishimoto in behind the defense. Kishimoto was all alone with the keeper, who came rushing out, and all Kishimoto had to do was chip it over him to give Vortis the surprising lead and the victory.